Analysis of the development status of China's textile industry

In 2020, the textile industry will continue to deepen its transformation and upgrading, and strive to resolve the impact of risks caused by the epidemic. The decline in main operating indicators has continued to narrow, the economic operation situation has recovered steadily, and the export trade has achieved unexpected growth driven by epidemic prevention materials.

The industry's production growth rate picked up steadily. Since 2020, the overall prosperity of the textile industry has continued to expand, and the production utilization rate has increased quarter by quarter. According to the survey data of the China National Textile and Apparel Council, the textile industry prosperity index in the first quarter of 2020 was affected by the epidemic and fell below the critical point of 50. Since the second quarter, the prosperity index has rebounded to above 50, and it was 61.3 in the fourth quarter, a good level in recent years , Which shows that business confidence is steadily improving.

In terms of production, the industrial added value of enterprises above designated size in the textile industry in 2020 will decrease by 2.6% year-on-year, and the growth rate will be 5 percentage points lower than that in 2019. Compared with the first three quarters of 2020 and January to February at the beginning of the year, the growth rate has decreased by 2 and 23 percentage points, respectively.

Exports achieved higher-than-expected growth. In the early stage of the domestic epidemic, epidemic prevention measures such as the closure of physical businesses, home isolation, and reduction of social activities caused a sharp decline in domestic consumption of textile and apparel products in the first quarter. However, since the second quarter, with the orderly recovery of economic life, residents' consumption activities have become more active. With the good support of various national consumption promotion policies, the domestic market sales of the textile industry have improved quarter by quarter. 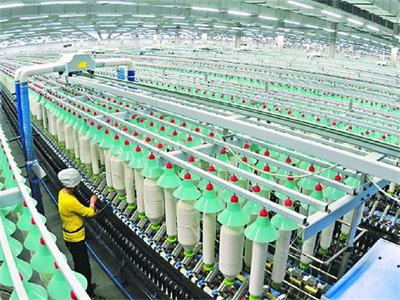 Driven by the procurement demand for epidemic prevention materials, the export scale of the textile industry has hit a new high since 2015. Customs Express data shows that in 2020, my country’s total textile and apparel exports totaled US$291.22 billion, an increase of 9.6% year-on-year, and the growth rate was 11.1% higher than the previous year. Among them, textile exports amounted to 153.84 billion U.S. dollars, a significant year-on-year increase of 29.2%, and the proportion of total exports of the entire industry increased significantly from 44.3% in the previous year to 58.2%;

The apparel export situation was more severe in the first half of the year, but in the second half of the year, as the overseas economy restarted, the advantages of the perfection of my country's textile industry system and the stability of the supply chain appeared, and apparel exports gradually improved. By the end of the year, the year-on-year decline in exports had narrowed to 6.4 %, since August, the monthly export value has achieved positive growth.

The operating income profit margin of textile enterprises above designated size was 4.6%, a significant improvement from the 2.2% level at the beginning of the year, and exceeded 0.2 percentage points in 2019. Among them, the industrial and home textile industries have outstanding profitability, with total profits increasing by 203.2% and 14.7% year-on-year, respectively, and operating income and profit margins of 11.4% and 5.6%, ranking in the forefront of all links in the industrial chain.