English
HOME / NEWS / Industry news / Dyeing error! How can it be remedied?

Dyeing error! How can it be remedied?

Dyeing error! How can it be remedied?

After dyeing, if the color light is too light compared with the sample provided by the customer, the method of adding color can be used to remedy. The adding method is determined by the depth of the sample light and the concentration of the adding color. There are generally two methods: rolling material and back dyeing. The former is suitable for special light color and light color samples, and can be rolled directly when drawing; the latter is suitable for medium and dark color for sample, should be based on visual inspection and sample test to determine the method of adding color.

Rolling material is generally rolling paint or reactive dyes. The color change of rolling coating is easily caused by temperature in the process of drawing, and it is easy to cause the phenomenon of "light jump" compared with the sample provided by customers. Rolling reactive dyes is easy to operate, stable color light, and has no effect on the color fastness of dyed fabrics at low concentration. The production practice shows that when the finishing concentration is lower than 0.8g/L, the rolling material has no effect on the dyeing fastness of dyed fabrics, and can improve the dry rubbing fastness of some fabrics. When the finishing concentration is higher than 0.8g/L, the white cloth stain and color fastness of the dyed fabric may decrease slightly.

Therefore, when the additive concentration is lower than 0.8g/L, the additive method of rolling reactive dye can be adopted.

If the added color concentration is higher than 0.8g/L, in order to ensure the color fastness, the whole process should be used to repair the color. This method has a long process, large waste of water, electricity and steam and high cost. Therefore, in the determination of samples should be considered to avoid.

(1) When using reactive dyes for dyeing, reactive dyes of the same type as the original prescription should be selected to avoid the phenomenon 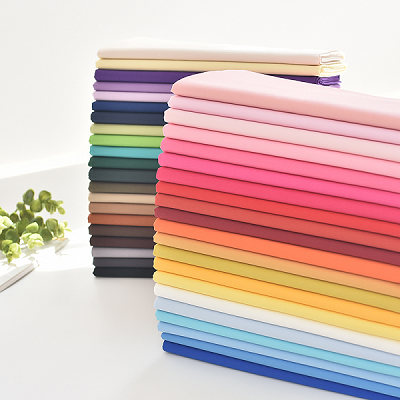 (3) When rolling, in order to ensure the dyeing fastness of the fabric, the amount of cross-linking agent must increase with the increase of the dye concentration. If the customer to the fabric feel request is high, they should increase the amount of softener appropriately.

When the color light of cotton dyed bulk goods is darker than the sample supplied by customers, the method of subtracting color is considered. Subtractive colors are generally divided into the following kinds.

This method can be adopted if the mass light produced by reactive dyes is about half darker than the sample provided by customers. However, it is necessary to do large and small sample tests first to determine the speed, temperature, dosage of soap detergent and other technological conditions. The dye with poor washing fastness faded seriously. When dyeing with three primary dyes, reactive yellow had the worst washing fastness and less yellow light after washing. For example, BES type dyes in the active yellow BES, yagin dyes active yellow 3RF, BF-DB, etc.; reactive brilliant blue, reactive emerald blue and other dyes together, after washing less brilliant blue, emerald blue light, such as BES, BES, yagosin dyes brilliant blue R, emerald blue BF-4G and so on.

When reactive dyes are dyed, their reactive groups can react with the hydroxyl group in the fiber, and some of the dyes can be hydrolyzed in the alkaline bath, so that the dye loses its binding ability with the fiber. By using the hydrolysis reaction of dyes, we can wash the dyed fabric by rolling a certain amount of NaOH solution, so that part of the dye on the surface of the fabric can be hydrolyzed to achieve the purpose of light color.

This method can be used if the mass production light is more than half or more deep than the sample provided by the customer, and the water washing method cannot meet the requirements of the sample provided by the customer. Among them, alkali washing concentration is the key to the degree of dye hydrolysis, therefore, on the basis of the complete success of the sample test, strictly according to the sample process on the machine operation, in general, the long machine to further lofting, normal driving to strictly control the speed and alkali concentration consistent, to prevent color difference before and after.

The concentration of alkali should be less than 20g/L. The higher the concentration, the worse the stability of the dye, the worse the stability of the bulk color before and after light. At the same time, alkali washing should consider the difference in the alkali resistance of each dye. Poor alkaline resistance of dyes, hydrolysis degree, serious fading; on the contrary, the alkali resistance of good dyes, hydrolysis degree is small, light fading.

In special light color, light color fabric light slightly darker, using some reactive dyes do not resist the oxidant properties of color reduction. 2g/L hydrogen peroxide was prepared, the pH value was adjusted from 10 to 11, and the fabric was soaked and washed with steam to achieve the effect of color reduction. Because of the different oxidation resistance of the dye, it should be put into production after making a good sample.

If the color of pure cotton fabric dyed with VAT dyes is slightly dark, only two reduction oxidation methods can be used to reduce the color, that is, the dye can be reduced after the excessive reduction caused by two dipping rolling reducing solution. However, this method is easy to make the dyed fabric dull, so special attention should be paid to it.

The concentration of alkali should be less than 20g/L. The higher the concentration, the worse the stability of the dye, the worse the stability of the bulk color before and after light. At the same time, alkali washing should consider the difference in the alkali resistance of each dye. Poor alkaline resistance of dyes, hydrolysis degree, serious fading; on the contrary, the alkali resistance of good dyes, hydrolysis degree is small, light fading.

If the mass sample color and customer sample depth is basically the same, but there is a difference in color can be used to correct the extinction method. Generally, there are two methods of rolling residual dye bleaching and rolling VBL whitening agent bleaching.

This method is suitable for light, medium and dark colors. The key is to master the principle of complementary color.

This method is only effective for light and extra-light cotton fabrics. If the production sample is darker than the customer's sample, VBL whitening agent can be rolled to increase the brightness. However, it should be noted that the amount of VBL should not exceed 2g/L, because excessive amount of VBL will darken the color. VBL is a direct dye with high affinity for fiber. Therefore, the rolling tank should be diluted proportionally at the beginning of dyeing, and the fabric production process should always ensure that there is a supplement to the rolling tank to prevent color difference before and after. The use of VBL extinction will certainly have a "jump light" phenomenon, especially indoor and outdoor "jump light", so customers on color light requirements are particularly high, can not use this method to repair color.